Hello, I’m MusiCommentator, and I can’t believe I’m saying this, but Wendy’s made an EP.  Yes, you read that right.  I’m not talking about some underground artist either, no.  I mean, literally, that the fast food chain Wendy’s thought it would be a great idea to make an EP.  You can’t make this stuff up!  I kind of wish this was a video review so you could see how hard I’m laughing right now.

This is usually the paragraph where I give background information on the artist and the project, but how do I even do that with a fast food chain?  Well, I guess it starts with Wendy’s Twitter page.  The Wendy’s Twitter page has, over the past few years, become famous for their roasts, mainly of other restaurants.  Looking at them, they can actually be pretty funny, like these: 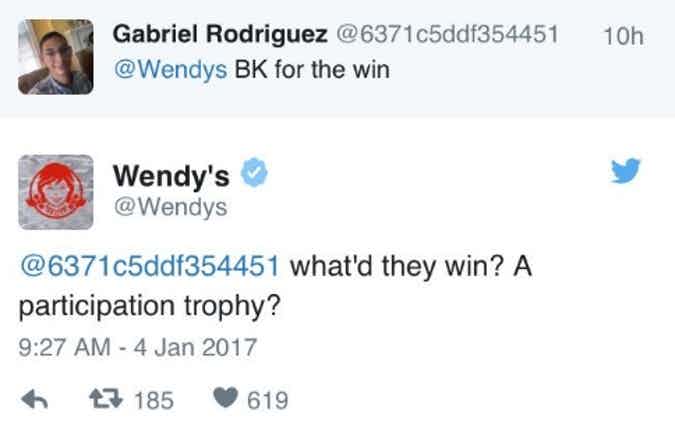 Pretty funny for a fast food restaurant, right?  Others online agreed, and chains like Taco Bell started following in Wendy’s footsteps.  This Twitter fame, though, apparently went to their head, as now they think they are hip enough to release a hip-hop EP targeting other fast food chains, and yes, it’s as bad as it sounds.

The first song had to make a reference to their Twitter, obviously, so people know why Wendy’s thinks they’re cool (even though this entire EP proves they’re not).  This whole project is pretty much 75% food puns, and with the first line of this song being “Cold with the flows, but the meat ain’t frosty”, you can tell what you’re in for.  I also like how the last line of this song states “Had to step outside of Twitter just to leave my fans with something”.  Yeah, people like your Twitter, but I don’t think you have enough of a cult following to get away with something as horrendous as this.  It’s not like they’re dedicated fans that stick with their artist like you’re some emo act (*ahem* Twenty One Pilots *ahem*)

Why does Wendy’s think that it’s Twitter beefs are on the league of the Tupac and Biggie beef?  They’re calling out all these restaurants like they’re so cool, but it just sounds so terrible.  Like, they can’t even say Mickey D.  They literally say “Mickey *Bleep*” in the chorus.  On a more serious note, though, I kind of feel bad for the girl who is rapping on these tracks because she sounds so dull and bored.  I hope they payed her a LOT to be on this trash.

Wendy’s can stay stuff in its tweets and it will sound cool, but when they put it in a rap song, its the cringiest garbage ever.  “Why yo’ ice cream machine always broke?” is probably the worst thing you can say in a rap song (right behind “England is my city” on Jake Paul’s “It’s Everyday Bro”).  I will give this song one compliment: it’s short, so I don’t have to suffer too much pain.

Wow, a song called CLOWN-in.  Who do you think it’s target is?  Hmm.  I mean, why does Wendy’s keep acting like these beefs are serious endeavors?  Gosh, it’s so terrible!  So, so terrible!  And the people who wrote these lines must think they’re so clever.  I can only imagine what they said: “Hey, let’s add ‘Leave you in shame, make you run back to Cirque du Soleil’, because McDonald’s mascot is a clown, and we’re calling him a clown.  Ha, isn’t that so funny?”  If that dialogue actually was spoken when making this project, I hope whoever said it gets demoted.

Thank the Lord, this EP is almost over!  I was reading the lyrics while listening to this song, but I can’t remember any of the lines anymore.  It’s all the same, terrible food puns.  I can’t do this anymore.

I feel so drained after listening to that.  It’s a ten minute commercial!  Like, this is crazy.  Who thought this was a good idea?  From the start, all the cards were stacked against this project, and it did nothing but stack more cards on itself.  The beats here are some of the most basic trap beats I have ever heard.  The lyrics are some of the most cringe-worthy I have ever heard, and by God I’m just glad it’s over!

If you couldn’t tell, I had a hard time picking my favorite track for this.  Like, how do I pick garbage out of more garbage?  I decided to go with “Rest In Grease”, as its short runtime makes it bearable, and her flow and the beat on it are not as bad as some others seen on this project.  My least favorite track was “Clownin”, as it contains some of the worst lines on this project.

Thank you for reading my “We Beefin?” review. If you liked this review, make sure to follow my website, Twitter, and Instagram, like this post, and be sure to check in to read my future reviews. Also, if you have a song or album you would like to see reviewed, tell me in the comments. Until then, keep listening to good music! I know I will.